February 2020 Member of the Month

If you know Sammie you know why we chose her for our February Member of the Month. Sammie is one of our core community people and whenever she comes in she works her butt off at being better than the last time. She hits new PRs almost every month and seems to surprise herself by it event hough it comes as no surprise to anyone else since she works so hard. We asked Sammie some questions and here is what she had to say…

How long have you been doing crossfit? 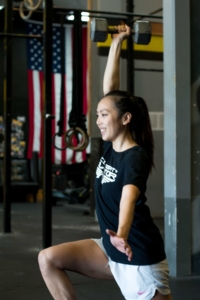 I’ve been doing CrossFit since March of 2018. Phil and I made a deal that if I started doing CrossFit, he would come out and play soccer… the rest is history!

What has been your biggest accomplishment in crossfit and outside the box?

Biggest accomplishment in CrossFit is officially participating in the 2020 Open!  I had always been intimidated by it but to me it’s actually an exhilarating way to see how far I’ve come along with my own fitness.  The atmosphere is electric and I think everyone, myself included, surprises themselves with all their gains. Friday Night Lights were epic.  Outside the box, my biggest accomplishments include officially “trapp”-ing a husband (LOL) and tying the knot, seeing FC Barcelona play in their own stadium, and starting a new position within my company.

What motivates you to come to Crossfit?

The sweat, the grit, the feeling of accomplishment after every WOD!  Reaching the end of each class really does enforce that no challenge is impossible!  Even if you have to scale, even if you have to slow down, even if you feel like dying, no matter what, as long as you keep working and keep moving you’ll still have overcome it all.  It’s physical, yes, but it’s also mental and I find myself being proud that I survived every time – ie. “Sammie, did you die though?!” Also, especially when you start logging your benchmark WOD times and barbell PRs and tracking your progress. 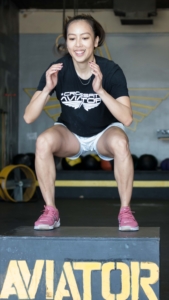 Favorite movement and most hated movement?

Favorite movements… does anyone else love box jumps?  Haha! I also enjoy front squats, deadlifts, power cleans, and clean & jerks!  My not-so-favorite movements are rowing(arghhhh) and toes-to-bar. Rowing is tough, it’s like a full on metcon in just one single movement!  And TTB always rip my hands, although if I’m being honest, I do need to work on strengthening that movement for myself so I can be more controlled.

What are your goals inside and outside of the box  this year!

Tell everyone what you do when you are not at the box.

When I’m not at the box I’m usually working, playing soccer, or enjoying Phil/Dougie (our dog) time. I split my time between the gym and soccer, so if I’m not at the box in the evenings you can usually find me on the pitch as part of a coed league down in Manhattan Beach. By the way, if anyone is interested in playing, I wouldn’t be opposed to putting together an Aviator Sunday league team!  They have a league right here in Playa Vista! Let’s do it! 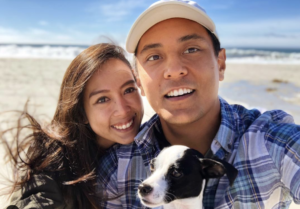 Besides running, what can you beat your better half at?

LOL. It is hard to beat Phil at anything – overall he is genuinely a better human than me, especially at the gym. But actually if I have to list something, I do think I can squeeze out more box jumps and burpees faster than him. And maybe longer broad jumps. And don’t even get me started about when we’re on the soccer field, haha!  Only kidding. Phil is an amazing athlete (he was all-American lacrosse!) and we are both competitive so it’s funny to poke fun at him even though I could never come close to his accomplishments at the box… because what are wives for?! I also once beat him in a 40 yard dash with his sister and brother-in-law as witnesses but he insists on remembering it differently.  Hahaha! 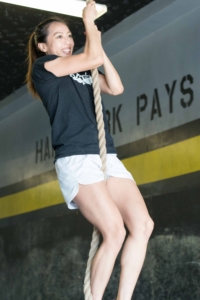 Thanks for being so awesome Sammie!